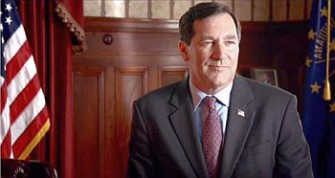 Wednesday, U.S. Senator Joe Donnelly released his annual report for 2017.  The report details Donnelly’s bipartisan legislative work, his travels around Indiana, and his efforts to help Hoosiers. The report also highlights the Senator’s accomplishments, a number of bipartisan bills and amendments that were signed into law, and his continued recognition as one of the most bipartisan Senators. Twelve of his provisions were signed into law in 2017 and, since 2013, he has had 35 measures enacted overall.

Donnelly said, “I’m the hired help and this report highlights my efforts over the past year to represent Hoosiers from all 92 counties in the United States Senate. By continuing to work in a bipartisan manner, several of the legislative efforts I led were signed into law and I was proud that my Jacob Sexton Military Suicide Prevention Act was implemented by our Armed Forces. Through my work with Republicans and Democrats my legislation that was enacted will improve mental health care for our law enforcement officers, address the devastating opioid abuse epidemic, and require the White House to develop and bring to Congress a comprehensive, clear strategy to counter North Korea.”

Delivered results through his legislative work: