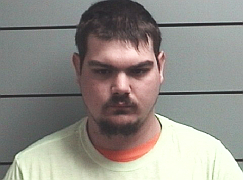 Sgt. Nicholas Laffoon of the Marshall County Police Department was working DUI Taskforce on U.S. 30 east of Plymouth on Thursday, January 11th at approximately 11:00 p.m.
About this time Marshall County Dispatch advised of two intoxicated persons who had just left the area of Oak Road and U.S. 30 in a gray Ford F150, traveling east on U.S. 30.

At approximately 11:03 P.M. Officer Laffoon located the suspect vehicle on U.S. 30 and performed a traffic stop near U.S. 30 and U.S. 31.   During the traffic stop probable cause was found that the driver had operated the vehicle while intoxicated.
Chad William Cable, 21 of LaPorte was taken to the Marshall County Police Department where he failed a certified chemical test.  He was lodged in the Marshall County Jail for Operating While Intoxicated, and Operating a Vehicle with a B.A.C. of .15% or above.