Donnelly: Congress Must Act to Ensure Thousands of Hoosier Retirees Receive Pensions They Have Earned 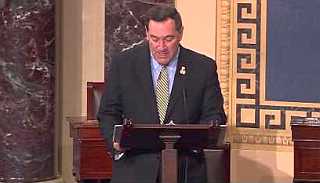 U.S. Senator Joe Donnelly spoke on the floor of the Senate Tuesday evening highlighting the need to protect the pensions of tens of thousands of Hoosier retirees, including 22,000 Teamsters and 2,700 mine workers. These retirees earned their pensions through decades of work, but are now at risk of significant pension cuts due to the critical or endangered status of dozens of multi-employer pension plans. Donnelly supports the Butch Lewis Act, which would put pension plans on solid footing through new financing options, while safeguarding pensions for retirees and current workers. He also supports the American Miners Pension Act, which would protect pension benefits for retired miners and ensure the solvency of the United Mine Workers of America Pension Plan.

Donnelly said in his speech, in part, “Hundreds of thousands of Americans will go to sleep tonight uncertain about their financial security. I’ve met these retirees. I’ve stood with them at rallies, I’ve attended their meetings. They simply want the pensions they worked so hard and spent so many hour laboring for, and that they earned. They simply want what was promised to them and what their hard work earned for them.

“…We have an opportunity to do the right thing, to ensure hundreds of thousands of Americans have the financial support they expected, that they worked nonstop for, and that they receive the pensions they earned. A solution is right here in our grasp. We have to get this done, and I urge the Senate to act immediately.”

Last year Donnelly helped lead the charge to pass and enact a permanent, bipartisan fix to ensure Indiana’s retired mine workers and their families receive the health care benefits they earned. Thanks to that fix, thousands of coal miners across the country, including approximately 1,500 retired miners in Indiana, were able to keep their health care benefits.