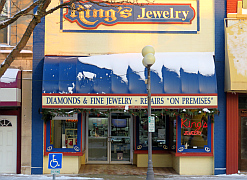 18 year old Daniel Smith of South Bend went into Kings Jewelry about 9:50 and sole a diamond ring valued at $4,300.  He ran out of the store as Plymouth Police Officer John Weir was walking in and a struggle ensued.  Smith broke free and ran to a car parked behind Treats Squire Shop.  He drove north in the alley and head on into a minivan that was south bound.  As he backed out of the alley Smith struck a utility pole he continued up Garro Street to   Lincoln Junior High and then south on Liberty Street ending up in the city’s Ledyard Water Treatment Plant where he was taken into custody.

Daniel Deshawn Smith was booked into the Marshall County Jail for Theft, Resisting Law Enforcement, Possession of Marijuana and Leaving the Scene of an Accident.