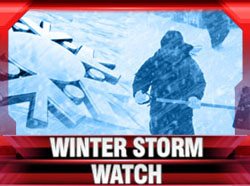 The National Weather Service has Marshall County under a Winter Weather Advisory until 7 p.m. tonight.  They have now issued a Winter Storm Watch for Marshall, Starke, St. Joseph and LaPorte counties from Tuesday morning through early Wednesday morning.

Heavy lake effect snow is possible today and tomorrow. Plan on slippery road conditions, including during the morning and evening commute.
Total snow accumulations of 2 to 4 inches are expected today.  Lake effect snow with the potential for more than 6 inches of additional accumulation is possible Tuesday and Tuesday night.

Be prepared for reduced visibility at times. Significant reductions in visibility are possible. There is still uncertainty with regards to where an intense lake effect snow band will develop and come onshore Tuesday and Tuesday night. This band will have the potential to produce snowfall rates of 1 to 2 inches per hour and create near whiteout conditions.
A Winter Weather Advisory for snow means periods of snow will cause primarily travel difficulties. Be prepared for snow covered roads and limited visibility, and use caution while driving.

A Winter Storm Watch for heavy lake effect snow means there is a potential for a large amount of snow in only a few hours.  Visibilities and depth of snow can vary greatly, impacting travel significantly.