Local county candidates continue to file their intentions to run for elected offices in the May Primary in the Marshall County Clerk’s Office. 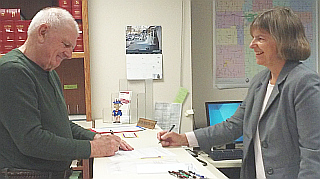 As of the close of business on Friday, January 12th, the most recent update includes Robert O. Bowen who did a courtesy filing for Superior I Court Judge on the Republican ticket.  Other Republicans who have filed include Deborah VanDeMark for Clerk of the Courts; Julie Fox for Auditor, Janet Howard, Anna “Buffy” Breeding and William Cleavenger for Recorder; Matt Hassel for Sheriff; Debra Dunning for Assessor, Kurt Garner for County Commissioner in District 1 and Judith Stone for County Council in District 4.

David Beggs has filed on the Republican ticket for Culver Town Council.

State Convention Delegates are also filing on both tickets,  So far Deborah VanDeMark, E. Nelson Chipman, Julie Fox and William Cleavenger have filed on the Republican ticket and Michelle Livinghouse has filed on the Democratic ticket.