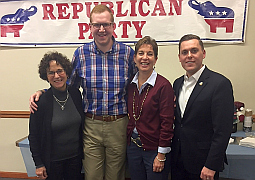 The beginning of 2018 has been a buzzing time for the Marshall County political scene. Many candidates have already filed for re-election or to fill open seats – and more are sure to come.

During this busy time the 2nd Congressional District Committee for the Indiana GOP met in Plymouth on January 11, to discuss the open seats on the leadership committee. The committee’s membership is composed of Chair and Vice-Chair for the GOP from each of the ten counties comprising the 2nd Congressional District. In addition to each of the county members, a group of four officers are elected to serve the entire District.

During the meeting Dave Holmes, Chairman of the Marshall County Republican Party, nominated Matt Sarber for the position of Secretary. After receiving a majority vote from the committee members, Sarber was approved and appointed as the new 2nd District Republican CongressionalCommittee Secretary. As Secretary his duties will include calling meetings for the Congressional committee and being the local liaison for communication with the Indiana State Republican Committee.