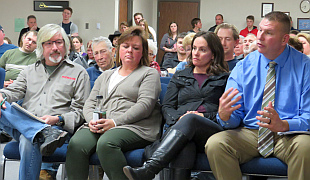 More than 100 people crowded into the second floor meeting room ofthe County Building to learn more about the possibility of a residential drug rehab facility leasing the building.

Greg Erickson and Ted Hayden from David’s Courage gave a brief statement of the program they would like to create in the Shady Rest facility.  Hayden said the mission of their program is to have a lasting change of spiritual, emotional, physical and financial health for those who are struggling with addiction.  They plan to provide a therapeutic community where safe, consistent and caring environment creates an atmosphere that is conducive to recovery and change.  The faith based program will treat and rehabilitate men and women 18 years of age and older who have a desire to change their daily routine, their environment and overall outlook on life.

Participants in the program will only be for non-violent offenders.  Each one will be screened, handpicked and want to be there.

Safety was one of the biggest concerns heard last night.

Hayden said they will be putting in a $35,000 security system with locked windows and doors.  The building will have staff members on premises 24/7.

During the 90 minute meeting 20 people spoke, some offering comments of support and others asking questions or discussing their concerns.

Several neighbors immediately to the east or west of the Shady Rest facility or in the Del-Lo-Me neighborhood spoke with concerns of safety. They discussed problems with residents of the Bowen Center walking away from the facility and wanted to know how the people would be secured.

Charles Garmon lives 3 doors from Shady Rest.  He presented a petition with 64 names against the proposal.  While he believed there is a need for this type of programming but said it wasn’t a suitable location.  He also worried about the effect on his property values.

Amanda Enyert, a recovering addict told her story and said after getting out of jail she had to wait a couple of weeks before getting into a treatment facility.  She said people who want to change their lives need guidance.

Eric Kielman lives only 2 doors away and asked if there would be an armed guard on duty.  He also asked why no one from the neighborhood was on the committee.

Mary Jo Kaser told the standing room only crowd that criminals are not just in town, they are in the county too have had her vehicle and lawnmower stolen.  She said, “People say they are scared these people are going to come into their homes.  These people walk amongst us every day as doctors and business owners in our community every day.”  She continued, “this facility is going to be people that want help.”

Naomi Nelson a 12 years sober addict.   She said, “If you refuse to allow addicts a place to have recovery in this town, you’re just contributing to the problem.”

Commissioner Garner closed the meeting about 7:30 saying, “I know there are passions on both sides here and I want to commend you guys for your courage to come up and speak.  I appreciate the fact that you guys were all very respectful to each other.”

The committee is still taking written comments.  They can be addressed to the Shady Rest Committee at 112 West Jefferson Street, in Plymouth.

The next meeting was not scheduled but will be later this month or early in February.  The local media will be notified of the date and time so the public can be informed prior to the meeting.