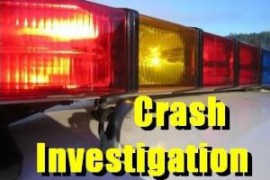 About 11:15 Sunday evening, January 7, Marshall County Police responded to a single vehicle Property Damage accident on US 31 in the area of 5th Road.

The vehicle, a 2004 Black Pontiac Grand Prix was being driven by 20 year old John Gunter of Winamac.  Gunter told police he was traveling south on US 31 when the vehicle began to lose control as a result of the “icy” road conditions.

After  losing control the vehicle ran off the right side of the roadway, down an embankment and the rear portion of the vehicle collided with a tree.

Gunter was wearing his safety belt and as a result no injuries were sustained.

Riecherts & Knepp Wrecker Service assisted with getting the vehicle removed from the ditch.  It was still operable and the driver was able to drive away from the scene once the investigation was completed.

Officers stated that due to the weather at the time, “ICE” began forming on roadways causing  them to be slick and hazardous.