No Vote on Christian Retreat Special Use at County BZA 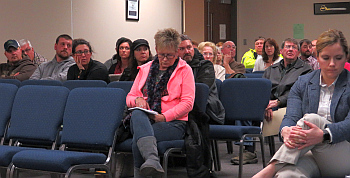 After nearly 90 minutes of discussion Tuesday night the Marshall County Board of Zoning Appeals was unable to get a vote on the “Special Use” request of Brent and Lorie Cooper to allow a Christian Retreat and event center at 11881 Gumwood Road in Bourbon.

The Coopers had initially presented their request in October and the BZA denied the request citing the special use would be injurious to the public health, safety, morals and general welfare of the area.

During the December BZA meeting the Coopers and their Lawyer, Jeff Houin presented additional information and clarification to facts that had not been presented in the October meeting.  The BZA voted 4 to 1 to reconsider the request at their January meeting.

During Tuesday’s meeting Houin said they were at the meeting to clear up misconceptions and detail the intended use of the property which as stated in their application is a Christian retreat and event center to be called Mary Martha: a Christian Retreat.  Plans are to have various sized groups as well as occasional events such as weddings and wedding receptions.   Houin said this site was selected because of its tranquil, peaceful, country setting.

Opening up for another public hearing, the third one there were 9 individuals who attended the meeting and spoke in support of the project while 5 letters of support were also read into the record.  There were 6 neighbors who spoke in opposition to the project and 1 new letter was read.

Concerns from the neighbors continue to be safety, increased traffic, noise, negative effect on property values and water run-off from a parking lot.

Board member Trent Bennett made a motion to approve the special use with a number of stipulations including: that the special use would only be for the Coopers and not transferable, no overnight stays, that the project uphold all standards, hours of operation would be 8 to 5 Monday through Friday and weddings would end by 11 p.m., 2 professional security people would be on duty when alcohol is available, noise from weddings would be controlled by being inside and that the existing house would not be used for the retreat only the barn would be.

Bennett’s motion died for lack of a second after BZA president Stan Klotz asked for a second three times.