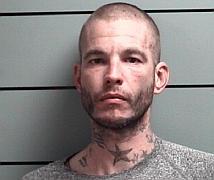 On Monday, January 08, at approximately 11:40 at night, the Marshall County Sheriff`s Department received a 911-emergency call of a domestic situation on 17C Road in Tippecanoe.

The caller reported that the suspect was allegedly armed with a knife and was holding his wife against her will.

The incident was handled peacefully and without further incident and 37 year old Caleb Geldner of the 17C Road address was arrested for Domestic Battery, Intimidation and Criminal Confinement.

A case report will be completed and forwarded to the Marshall County Prosecutors Office for review and formal criminal charges being filed.