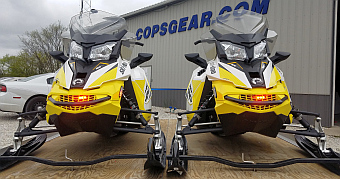 Update:  Indiana Conservation Officers received an anonymous tip from a citizen on January 5, which led to the recovery of two stolen snowmobiles.  Since then an arrest has been made and several more are pending as the investigation continues.

The Department of Natural Resources Law Enforcement Division is thankful for the overwhelming response and assistance of our citizens.  Without the support of the community and your willingness to share this story, this outcome would not have been possible.

This investigation is continuing and no other information is available at this time.

The snowmobiles were stolen on or around December 15, 2017 from Potato Creek State Park.