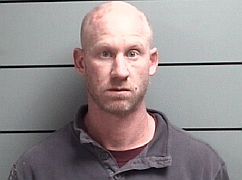 Tuesday afternoon about 12:45 the Marshall County Central Dispatch received a request for police at a residence in the 8,000 block of 5th Road near Bremen.    Arriving on the scene, Marshall County Police Officer Nick Laffoon found probable cause that 39 year old Justin M. Shonkwiler of South Bend had battered two individuals at this residence.
During the altercation the home owner discharged a single shot from a handgun in a direction away for the offender in an apparent attempt to scare him away.  While interviewing witnesses at the scene Mr. Shonkwiler was found driving in the area and was taken into custody by deputies.

Shonkwiler was transported to the Marshall County Jail where he was lodged for Battery Resulting in Bodily Injury and held on a $750 cash bond until 8 p.m. when the bond was paid.  His initial court hearing will be January 16th in Marshall Superior Court II.