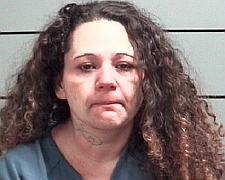 An Illinois woman was arrested on Saturday, December 23rd by County Police Officer Wozniak after he stopped to assist a disabled motorist on US 30 near Elm Road.

Just before 2 in the morning the officer observed a blue 2006 Saturn Ion who ended up being out of fuel.  An occupant in the vehicle, 31 year old Melissa Renee Carmack of Olmsted, IL told the officer the male subject with her had left the scene.  She was unable to identify him or give his name.

Officer Wozniak detected the odor of marijuana from the vehicle and a search resulted in a glass methamphetamine pipe and a used syringe.  The pipe had a white powdery substance on it which tested positive for meth.

Melissa Carmack was taken into custody and transported to the Marshall County Jail where she was booked in for Unlawful Possession of a Syringe, Possession of Paraphernalia and Possession of Methamphetamine.  She was held on a $1,500 cash bond.