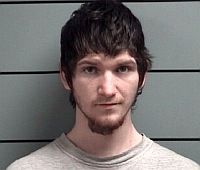 A plea agreement has been executed between the Marshall County Prosecutor’s Office and Mr. Maeson Coffin and his attorney, June Bules.

Maeson Coffin, 20 years of age had been charged with Murder, Conspiracy to Commit Murder, Burglary, Auto Theft and Theft in the Paul Costello Case.

Marshall County Prosecutor Nelson Chipman said, “Generally the terms of plea agreements are not made public until presented in open court at the time the defendant pleads guilty.  Due to the understandable intense public interest in this horrific crime, I am going to make an exception to the rule of non-disclosure of the terms.  I also am comfortable in disclosing the terms because we have consulted thoroughly with the victim’s family and kept them abreast of the major case developments as each occurred from the very beginning.”

The prosecutor said his office made it a condition of Gavin Monaghan’s plea agreement that he subject himself to an interview by Prosecutor Chipman and Chief Deputy Prosecutor Tami Napier.  That interview took place a couple weeks ago, and before Monaghan’s sentencing. (Monaghan was sentenced to 65 year in prison for the Murder of Paul Costello on December 13th.)

The prosecutor’s office was granted permission to interview Mr. Coffin and the information gathered, and after conferring with Marshall County Detectives Duane Culp and Jeff Snyder, convinced them that Mr. Coffin’s involvement with the crime began after Paul Costello was brutally killed by Monaghan.

Chipman said, “In full consultation with the family, both recently and previously, it is our measured judgment that the appropriate offenses for Maeson Coffin to answer for are Burglary, Auto Theft and Theft.  There is no agreement as to any other terms including the length of incarceration or if the sentences were to run consecutively or concurrently.  The offenses of Murder and Conspiracy to Commit Murder will be dismissed upon his plea of guilty to the Burglary, Auto Theft and Theft.”

The Prosecutor went on to say, “I have been authorized to state on behalf of Paul’s brothers Don and Ralph Costello (Don of Bolingbrook, Illinois and Ralph of LaPaz) that the family is very appreciative of the hard work of Marshall County Police Detectives Culp and Sharp, Indiana State Police Crime Scene Tech Sgt. Lamar Helmuth and the ISP Laboratory in Lowell, Indiana , and the other police agencies involved in the identification and apprehension of Monaghan and Coffin.  He went on to say, “They have also authorized me to state on their behalf they understand the reasons for the terms of the agreement.  Both Don and Ralph Costello, as well as other family members, have expressed to us their disappointment that Indiana law does not make available a greater range of incarceration for the abuse of their brother’s corpse and for Coffins’ actions as an accessory after the fact.  They are appreciative though, that this will finalize the criminal case, although it does little to ease the grief and anguish caused by the actions of these two young men.”

The Submission of the plea agreement is set for January 3rd.