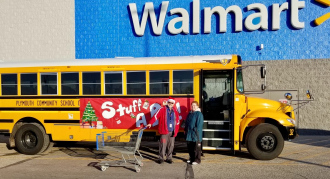 The first-ever Plymouth Community School Corporation Bus Drivers’ “Stuff a Bus” event that was held in the Walmart parking lot on Saturday was a huge success! Every seat on the bus was filled with grocery bags of food. At the end of the three-hour food drive, $200 in cash was also donated. The donations were divided in half and were dropped off at the Bread of Life Food Pantry and the Marshall County Neighborhood Center. The nonperishable food drive was organized by the PCSC bus drivers.

Plymouth Community School Corporation Director of Transportation Brenda Uceny said, “We would like to thank Walmart for allowing the food drive to be held in their parking lot, our bus drivers who volunteered their time collecting donations, as well as our community for being so generous!” 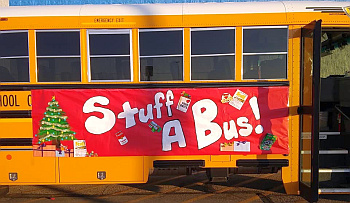 Assistant Director of Transportation Brandon Berger said PCSC Bus Driver Mark Harder thought up the “Stuff a Bus” idea and he was also one of the main organizers. Berger said the event was so well executed that the PCSC Transportation Department is hoping the nonperishable food drive can become an annual event.