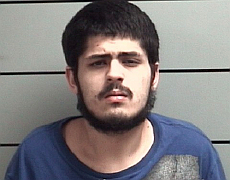 On Monday December 19th, at 12:02 A.M. Sgt. Nick Laffoon of the Marshall County Police Department was working DUI Taskforce on U.S. 31 near U.S. 30.  He conducted a traffic stop on a vehicle for an equipment violation.

During the traffic stop probable cause was found that the offender had operated a vehicle while intoxicated and had a license status of suspended-prior.

A probable cause search of the vehicle yielded a small amount of suspected illegal drugs and drug paraphernalia.

The offender, 22 year old Tyler Marcial of Bourbon was lodged at the Marshall County Jail on a $3,000 cash bond for Possession of a Narcotic Drug, Operating While Intoxicated, and Driving While Suspended with a prior.