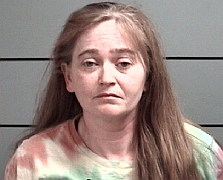 On Tuesday, December 19th the Marshall County Sheriff`s Department obtained a call of a possible impaired driver traveling in the area of US 6 and Plymouth-Goshen Trail, near Bremen.

Marshall County Police along with Bremen Police were responding to the area, when the Sheriff`s Department obtained a second call notifying them of a property damage accident involving the suspect`s vehicle.

Officers arrived and found that 36 year old Jennifer M. Conley of Argos had gone off the roadway and hit a NIPSCO utility pole.  It was believed that Ms. Conley was impaired.  She was transported to a local hospital for a chemical test and booked into the Marshall County Jail for Operating While Intoxicated.

The Bremen Fire Department along with Luthern EMS responded to the scene and assisted at the scene of the accident.