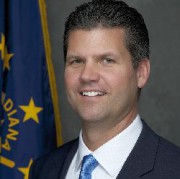 Mishler said, “Indiana has become a national leader in attracting companies that bring more jobs to our state. With that growth comes a period of reconciliation that reflects the temporary reduction in corporate tax revenue as originally forecasted for a number of reasons.”

The senator continued, “The new Administration has moved quickly in clearing out a backlog of tax appeals, resulting in more Hoosiers getting great government service and receiving the refunds they are due. In addition, with the uncertainty of the future of federal tax reform, many corporations are deciding to cash out any outstanding balance they may have with the state, rather than letting it carry over from year to year, which many have done in the past.”

He went on, “The Indiana Economic Development Corporation has also done a fantastic job attracting businesses that create jobs in our state through the EDGE Tax Credit. More of those credits, which are not paid out until the jobs are created as promised, have been certified, so the forecast has adjusted for more of those to be paid out.”

Senator Ryan Mishler closed his comments by saying, “The revenue forecast is a dynamic process that adjusts for the realities of our state’s revenue. These forecasts provide valuable information as we plan for the future, and provide the legislature with the information we need to react appropriately moving forward. Moreover, these numbers reiterate the importance of maintaining healthy reserves when revenues do not perform as forecasted.”