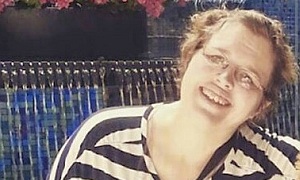 Three years after Sarah Gibbs’ murder, her family is trying to go on with their lives, but every day is still a struggle.

“There’s not really anything new. We’ve got some suspicions but there’s really no evidence. That’s where we’re at now. Every day is a struggle, it’s something you never really get over. It’s ruined the holiday spirit, but we’re going on with our lives – it’s what Sarah would have wanted,” said her father, Howard Gibbs.

On Dec. 19, 2014, as crews extinguished a house fire in the 1000 block of Smith Street in Warsaw, they discovered Gibbs’ body. An autopsy determined she had been murdered prior to the fire.

Sarah, who was 34 at the time of her death, was autistic. In 1999, she became a Cardinal Center client, eventually moving into the duplex across from the fairgrounds, living there for 14 years.

Howard said Sarah had her “Sarahisms” and he and his wife, Betty, are constantly reminded of them. She loved music and was a musician. Howard said he was a musician himself, but not as good as his daughter.

“She’s with us in our every day lives. The reminders are constant,” he said. “Sarah made a lot bigger impact on her environment than what people realize. We constantly run into people who knew her. She left an impact on people she had contact with.”

“We appreciate all the support we’ve received from the community,” he said.

He said they keep in contact with the Warsaw Police Department. The WPD still considers Gibbs a cold case with no active leads.

“Unfortunately, the trail is pretty cold. I’m pretty sure there might be people out there who might know something, but there’s no evidence,”?Howard said.

A Kosciusko agency through CrimeStoppers at one time offered a $10,000 reward for evidence that would lead to the capture of the person responsible for Sarah’s death. That reward is still posted on the CrimeStoppers website.

The Crime Stoppers website on the crime is at http://southbend.crimestoppersweb.com/sitemenu.aspx?P=crimeoftheweek&ID=203&PageNum=2.

There also is a Facebook page for information about Gibbs’ murder, which can be found under “Justice For Sarah Gibbs.”