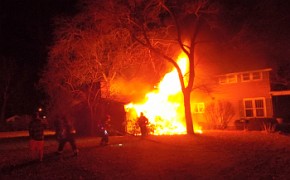 Plymouth Fire Chief Rod Miller said Thursday afternoon an electrical malfunction was the cause of the December 7th fire on Pearl Street.

Plymouth’s Fire Investigator, with the assistance of the State Fire Marshall, and in a joint investigation with the insurance company on Tuesday and Wednesday of this week determined a faulty extension cord plugged into a power strip caused the blaze that kept firefighters from three departments busy for many hours.

Fire Chief Miller said, “This is the second fire in a week caused by an electrical issue with a power strip.”  The Plymouth Fire Department responded to a fire on December 1st at 1325 Madison Street was also electrical in nature.

Chief Miller warns that most power strips are rated for 15 amps.  Overloading a power strip and having the safety fail can result in a fire.