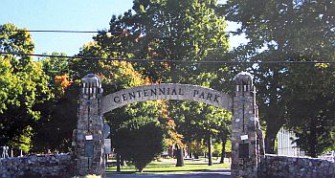 In a very short meeting last week the Plymouth Park Board was informed by City Attorney Sean Surrisi that the mayor has submitted an application to INDOT for a grant for the historic foot bridge on East LaPorte Street in River Park Square.  The grant would assist in the cost of repairs necessary to the bridge.

Surrisi said the grant was put together rather quickly with the assistance of City Engineer Rick Gaul.  He said the Mayor was able to obtain several letters of support from individuals and groups in the community in support of the grant.

In other business, Park Superintendent Mike Hite updated the park board on phase II of the Greenway Trail.  This section is from the Coffee Lodge on East Jefferson Street through Gill Park behind the Boys and Girls Club to Garro Street in River Park Square.  The bid letting is scheduled for February 7, 2018 and the plan is to have the project substantially complete by the end of July.  This project includes a new pedestrian bridge from Gill Park to River Park Square.

Hite said the new pedestrian bridge from River Park Square to the South Gateway is expected to be set later this month.  He commented, “This new bridge will not be open to the public until the construction for the River Gate South residential project is completed next summer.”