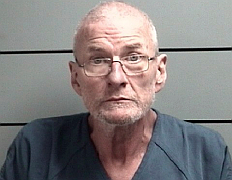 An Argos man was arrested Tuesday evening by the Argos Police Department for battery with a deadly weapon.  61 year old Daniel Pearcy II  of West Broadway Street in Argos was arrested on a preliminary charge of Battery with a Deadly Weapon a Class 5 Felony.

Argos Police along with Marshall County Officers were dispatched to the defendant’s address about 9:30 Tuesday evening after receiving information from a third party in reference to a battery that had occurred involving a weapon, leaving the victim bleeding from the head.

Officers arriving at 101 South First Street came in contact with the victim who had a large laceration to the face and back of the head.

Officers were able to apprehend Daniel Pearcy II without incident.  He is currently being held at Marshall County Jail on a $1,500.00 cash bond.

The victim was treated by Argos EMS and was in fair condition.

The Argos Police Department is continuing to work the investigation.