Public Meeting Scheduled in January for Shady Rest Facility Use 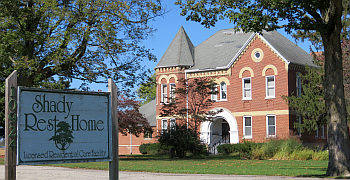 The Shady Rest Committee heard Greg Erickson and his wife Kelly during their meeting Tuesday afternoon.  The discussed their business plan for a residential addiction recovery program at Shady Rest.

The Ericksons said the facility could house up to 48 men and women although they would need 20 clients to break even.  Their business plan spelled out expenses which they said they estimated high and various revenue sources which they said they estimated low.  They also commented that one local business has offered $5,000 a month for 6 months as a donation to help the facility get started.

When asked about updates needed to make the facility workable Ericksons said both bathrooms would be renovated,  security doors added between wings, $35,000 for a new security system and  $10,000 for a fire alarm system sprinkler system.

Greg told the committee they plan to conduct fundraises to assist with revenues but can’t begin that phase until they have a commitment from the county.  He said, “Our goal is not to be a burned to Marshall County, the state or federal government.”

The Ericksons detailed the program called “David’s Choice” to the committee.  Recovering addicts would go through an application process to participate in the 6 to 9 month program which requires them to get a job, attend classes for life skills, participate in counseling, do community service, attend church and help with job duties at the facility.

Several neighbors attended the meeting with questions and concerns.

Ward Byers, committee member and Director of Community Corrections detailed the screening process for those in his program that may be housed at the Shady Rest facility.  He said they are low risk offenders non violent offenders who will have GPS ankle bracelets.

The Ericksons noted that not all clients would come from the Community Corrections program. Some may be court ordered, some through probation and other may come of their own free will.  While those would not have ankle bracelets they did note there would be 24 hour supervision and a security system that would include multiple cameras.

The Shady Rest committee has been charged with making a recommendation to the County Commissioners on the future use of the facility.  At this time they have not made any formal decisions.   They did schedule a public meeting for Wednesday, January 10th at 6 p.m. in the second floor meeting room of the County Building.  The public will have an opportunity to get more information on this proposed program and voice their comments and concerns.