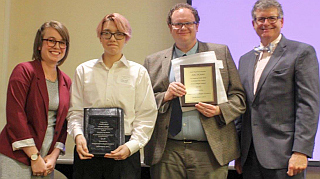 Realizing the Dream is a program sponsored by the Independent Colleges of Indiana that acknowledges first-generation college students for outstanding achievement in their freshman year and are now in their sophomore year by awarding the “Realizing the Dream” scholarship to chosen students. It has been funded by the Lilly Endowment Inc. since 1989. This year’s recipient from Ancilla College is Casey Head.

Each honored student will receive a $2,500 check to help with college costs, and each student’s selected “most influential” teacher/mentor will receive a $1,000 professional development grant. One out of every three students on ICI campuses is first-generation. Generous financial aid provided by the campuses themselves, combined with state and federal grants, makes a private college education a possibility for all students in Indiana.

Though many scholarship recipients choose “most influential” teachers that inspired them from an earlier time in their education, Head chose Ancilla College professor, Joel Thomas. “Despite the fact that he has a more introverted personality, like myself,” Head said, “it is inspiring to see him come in everyday and work hard. He really deserves it.”

Thomas was honored by the nomination. “It has been great to see Casey grow and develop over the course of the semester,” said Thomas. Thomas attended the ceremony with Head at the Sheraton Hotel in Indianapolis. Emily Trimble, manager of Indy Women in Tech Program at TechPoint in Indianapolis, gave the address at the reception and was closed by remarks from ICI President and CEO, David Wantz.