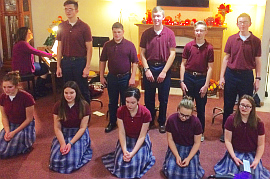 “He is no fool who gives what he cannot keep to gain that which he cannot lose,” and thus began the narrative of The Jim Elliot Story as told by the Grace Baptist Ministry Team of Plymouth.

Under the direction of Pam Mechling the GBMT presented a mini-musical to the residents and their guests at Miller’s Assisted Living.  The musical told the true story of five missionaries who were killed while participating in Operation Auca, an attempt to evangelize the Huaorani people of Ecuador in the mid-1950’s.

Using actual diary entries from the missionaries, Scripture, hymns, and dialogue the GBMT told the remarkable story of five missionaries who eagerly reached out to the natives of Ecuador.  The Auca people turned on these men after the men thought they were making progress in befriending them. The five men:  Jim Elliot, Nate Saint, Pete Fleming, Roger Youderian and Ed McCully were killed in one brutal attack as they were trying to food and gifts with the natives. However, because of their faithfulness to God’s calling many young people around the world became Christians and felt called to mission work after hearing of the men’s conviction to reach the Aucan people.