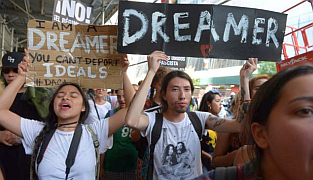 Jim Smart was granted approval by the Plymouth Board of Public Works and Safety to hold a Unity Walk this Saturday.

He told the board the ecumenical walk is in support of the Latino brothers and sisters focusing on the DACA Dreamers.

DACA is the program that gives temporary protection to undocumented migrants who arrived in the United States as children.   Those protected under DACA are known as “Dreamers.”  To apply for DACA a person must have been younger than 31 on 15 June 2012, when the program began, and “undocumented”, lacking legal immigration status. They must have arrived in the US before turning 16 and lived here continuously since June 2007. Most Dreamers are from Mexico, El Salvador, Guatemala and Honduras and the largest numbers live in California, Texas, Florida and New York. They range in age from 15 to 36.

The Unity Walk on Saturday is an attempt to build a stronger and more diverse community here in Plymouth and Marshall County.

Smart said, “Unity builds community!  In hope to gain a better understanding of cultural differences, showing love for our neighbors with respect and dignity.”

The Unity Walk supporting DACA Dreamers begins at St. Michael Church at noon with a brief prayer and then they will walk to St. Thomas Episcopal Church, to Michigan Street, south to Penguin Point and then back north to St. Michaels Church.