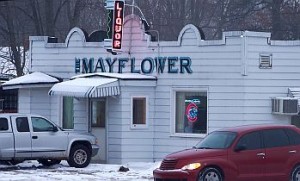 Just after midnight Plymouth Police and EMS were dispatched to the mayflower for a physical fight that had occurred and one male was bleeding from the head.

City police arrived on scene and during the investigation found Devein Sanchez in possession of a handgun without a permit.

Sanchez became combative with Officer Richey and after a brief struggle officers were able to take Mr. Sanchez into custody. He was transported to Saint Joseph Health Systems in Plymouth for treatment of injuries sustained in the original altercation and then was transported to the Marshall County Jail and held on a $2,000 cash bond.  He was booked in for Theft, Carrying a Handgun Without A Licence and Resisting Law Enforcement.