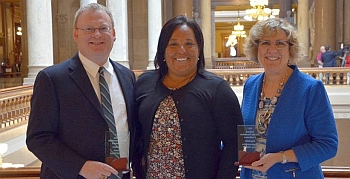 The honor was given to the lawmakers for their work on a law passed earlier this year to help decrease the number of youth suicides in Indiana. Year after year, suicide remains one of the top three leading causes of death for young people ages 15 to 24, according to the Indiana State Department of Health (ISDH).

“We crafted House Enrolled Act 1430 to ensure that those who are around our youth on a regular basis will be able to recognize suicidal behaviors and actions,” Head said. “The number of young people in Indiana taking their own lives is tragic, and I will continue to work hard to put an end to these preventable deaths.”

“It is our belief that providing these new resources will better prepare people who work with youth to help identify those young people who may be contemplating self-harm,” Olthoff said. “Suicide is such a painful way to lose a child. I would like to thank the suicide prevention community for helping us craft this new law.”

According to the ISDH, young people with mental health problems, such as anxiety, depression, bipolar disorder or insomnia, are at higher risk for suicidal thoughts. Teens experiencing major life changes, such as the divorce of parents, moving, change in financial security or even bullying are more likely to think about suicide.

Head and Olthoff encourage those who are contemplating suicide or need help to call the National Suicide Prevention Lifeline at 1-800-273-TALK (8255).