Indianapolis Man Arrested for Operating on a Suspended License 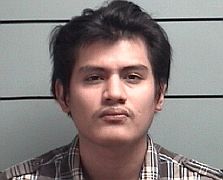 On Monday afternoon, May 15th, at approximately 12:06 Marshall County Police Officer Laffoon was working interdiction on U.S. 31.  A traffic stop was performed on a vehicle for an equipment violation and it was found that the offender, later identified as 21 year old Saul R. Ramirez of Indianapolis had been operating a vehicle with a suspended license.

Mr. Ramirez was detained at the scene and then lodged at the Marshall County Jail for Driving While Suspended – Prior.