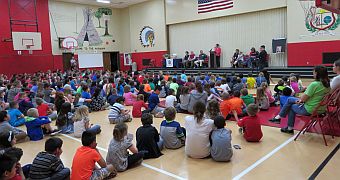 Mr. Robert (Bob) Pickell was a music teacher that taught for 38 years throughout the Plymouth Community School Corporation. From 2005 to June of 2016, Mr. Pickell taught music at Webster Elementary School. A few weeks after his retirement last year, Pickell passed away from an accident at his home.

For decades, students mentioned how much fun they would have in Mr. Pickell’s music class. Students looked forward to attending his classes due to his enthusiasm and energy about music. 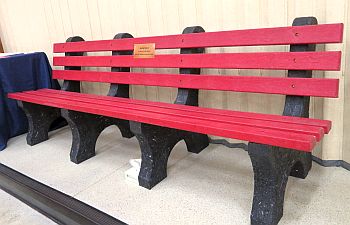 Mr. Pickell had a love for many volunteer projects, including coordinating recycling with the Knights of Columbus. For many years, Mr. Pickell spearheaded a recycling initiative at the elementary schools in Plymouth, which turned recycled materials, such as bottle caps and plastic container lids, into pieces of outdoor furniture, such as benches and tables.

Over the past several school years, the staff and students at Webster have collected over 2000 pounds of recyclable plastics. After Pickell retired, the Webster staff and students continued with the project in Pickell’s honor this school year. Webster has collected so many recyclables that they were able to purchase two benches and a table. Each item required over 500 pounds of recycled plastics. 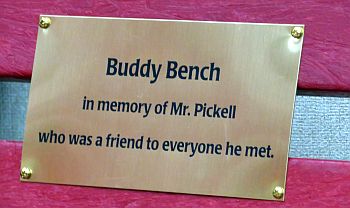 “We decided to call the benches we had made “Buddy Benches” in Mr. Pickell’s honor because he was a great friend to anyone he ever met and would do anything to help others and raise their spirits. His enthusiasm and humor were infectious,” said Principal Carrie McGuire.

The benches will be placed on the playground for all students to use when they are in need. When children are feeling lonely, or just want a friend to play with or someone to talk to, they will be able to go over and sit on the benches. Other children will be encouraged to approach the child(ren) seated on the bench and ask them to play with them or just have a conversation with them,” said Webster Elementary School Principal Carrie McGuire. 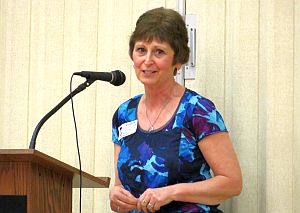 Pickell’s wife, Chris, and family members attended the special tribute. McGuire said the Buddy Benches are not only special for their Webster family, but for all who knew Mr. Pickell.