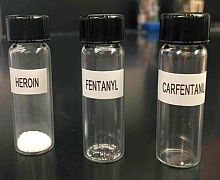 State medical personnel and responders are sounding the alarm on a continuing drug trend that could overdose, or potentially kill, Hoosiers and responders with minimal contact.

Gray Death, a particularly dangerous mixture of heroin, fentanyl, carfentanil and other synthetic opioids, made its way to Indiana this week, causing an overdose in central Indiana. Partners warning about the increased risk are State of Indiana Emergency Medical Services and the State Fire Marshal, part of the Indiana Department of Homeland Security; Indiana State Department of Health and the Indiana State Police.

A persistent increase in opioid overdoses tied to the synthetic drug carfentanil have been seen around the country, prompting concern.

“When approaching an emergency, you never know where extreme danger may lurk, so every precaution must be taken,” said Dr. Michael Olinger, State Emergency Medical Services Medical Director. “That’s definitely true for any drug-related scene, where even a tiny amount of the wrong substance can be deadly.”

“Here’s the bottom line.” said Indiana State Police Supt. Doug Carter, “Many people become addicted to opioids from what originally started as legitimate prescribed use, while others became addicted as a result of illicit use.” Carter continued, “But addiction is addiction regardless of the path and this is not a problem we can – or should try – to arrest our way out of.  And equally as troubling is the threat these substances are posing to the health and safety of public safety professionals.” Carter concluded, “We in law enforcement will continue to direct our resources toward arresting the traffickers of these illegal substances and working with prosecutors to build the strongest case possible to make the price of conviction higher than the profit from peddling death and destruction.”

Carfentanil and other fentanyl-related compounds are a serious danger to public safety, first responder, medical, treatment, and laboratory personnel.  These substances can come in several forms, including powder, blotter paper, tablets, and spray. The substance can be absorbed through the skin or accidental inhalation of airborne powder.

“With the pervasive nature of opioids and addiction, there is always the chance that family or friends may come into contact with dangerous substances when working to save their loved one,” said Dr. Michael Olinger, State Emergency Medical Services Medical Director.

When responding to an overdose, response personnel should remember the following best practices:

Be aware of any sign of exposure.  Symptoms include: respiratory depression or arrest, drowsiness or profound exhaustion, disorientation, sedation, pinpoint pupils and clammy skin.  The onset of these symptoms may occur within minutes of exposure.

Seek immediate medical attention.  Carfentanil and other fentanyl-related substances can work very quickly, so in cases of suspected exposure, it is important to seek medical attention immediately. Any needle stick should be medically evaluated as soon as possible.

Do not touch any potential drug materials or paraphernalia. Carfentanil can be absorbed through the skin or accidental inhalation of airborne powder. Avoid coming into contact with needles, bags or other paraphernalia. Do not come into contact or disturb any powder that may be in the area.

Be ready to manage the victim’s airway in the event of exposure.  Opioids are especially dangerous because they override the body’s breathing reflex, causing victims to suffocate. While naloxone is an antidote for opioid overdose, it might not be available. Providing breathing assistance could help prolong the victim’s life while waiting for emergency medical services to arrive. Even if naloxone is available, always send an overdose victim to the hospital for monitoring. Naloxone may wear off before the effects of the opioid, making it possible for the victim to stop breathing again.