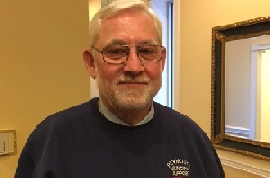 Dave Latimer announced to the Plymouth Board of Aviation Commissioners at their meeting Tuesday night,  that he will be retiring on July 1.  Lattimer has been the airport manager for nine years.

Latimer reported to the board that there are eight airplanes who have requested hanger space at the airport, but they are completely full.  Some of those people have been waiting for an extended period of time.

The board approved the request of the Marshall County Older Adult Services to hold next years senior expo at the airport.  That will require displacing six airplanes.  Latimer contacted all six and received three responses only one of which was negative and they decided to go ahead with the event despite the one renter’s objections.

They also turned down the request by Mathew Lawrence to use the conference room to conduct counseling sessions.  Lawrence planed to charge for those sessions and the airport has no means to charge for rental of the facility.

The AWOS system is operational but the FAA has still not certified it.  The inspector has suggested that he might be there to complete the tests next Tuesday.

The tractor that runs the mower broke down last month and is waiting for repairs but parts are on back order.  The cost of the repairs will be at least $4,000.  The airport may need to rent a tractor for the next couple months.