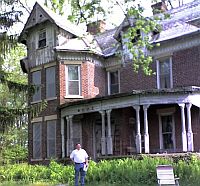 Carey and John Weir were granted a Special Use variance to allow a daycare at 1715 Lake Avenue Tuesday evening by the Plymouth Board of Zoning Appeals.  The daycare will be located on the curve between the historic Hohan-Klinghammer House and Saint Joseph Hospital in Plymouth.

Currently Carey operates a home daycare operation in two building west of the courthouse and houses up to 32 children.  The couple proposed a new facility with 4 suites and an attached garage.  Each suite would have its own restroom facilities and kitchen and the facility would be able to house 64 children.

With no public comments the Plymouth BZA unanimously approved the request.

A second request from the Weir’s was approved was a variance of development standards to create a parcel with only a 150 foot lot width instead of the required 210 feet minimum.  The home was originally built in 1858 and sits smack-dab on the property line of two parcels.

The request will allow the Weirs to separate the historic home from the other property where the daycare operations will be.  At this time, unsure of their future plans, saying they may sell it or donate it.

There were no public comments on this request either and the BZA unanimously approved their request.