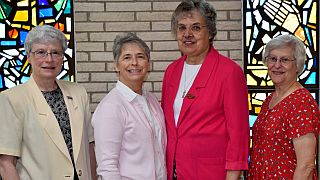 Following a process of discernment and prayer, the Poor Handmaids of Jesus Christ Chapter delegates, during the Provincial Chapter of Elections held April 28-30, elected a leadership team who will direct them during the next four years. Sister Judith Diltz was re-elected as provincial and Sister Michele Dvorak was re-elected as first councilor. Sister Joetta Huelsmann and Sister Margaret Anne Henss were newly elected as councilors.

Sister Judith Diltz, a native of Mishawaka, Indiana, took her first vows as a Poor Handmaid in 1969.  Since that time, she has ministered in education and served the Poor Handmaid Community. She taught English at Bishop Dwenger High School in Fort Wayne, Indiana; Mater Dei High School and Kaskaskia College in Breese, Illinois; Marian High School in Mishawaka; and was the English and Humanities Professor/Faculty Assessment Coordinator at Ancilla College in Donaldson, Indiana.  Sr. Judith also served as the PHJC Vocation Director, Postulant /Affiliate Director, and Director for Development.  She was Provincial from 2013 to 2017.

Sister Michele Dvorak has ministered in education since 1976.  She has been a teacher and principal in Indiana and Illinois and a Professor at Calumet College of St. Joseph in Whiting, Indiana where she also held the position of Vice President of Academic and Student Affairs.  For the past four years, she served as first councilor of the Poor Handmaids of Jesus Christ. Sister Michele was born in Minneapolis, Minnesota and took her first vows in 1976.

Sister Joetta Huelsmann has served in different ministries since taking her final vows in 1972. She was a teacher, parish minister, director of religious education, pastoral associate, retreat house staff, and co-director and director of John XXIII Retreat Center in Hartford City. Sister Joetta previously served on the Provincial Team as councilor from 1997 to 2005. She was born in Breese, Illinois.

Sister Margaret Anne Henss, born in Trenton, Illinois, has been an educator, and controller and treasurer for the Poor Handmaids of Jesus Christ American Province.  She has ministered at HealthVisions Midwest in Hammond, Indiana since 2008 as financial assistant/special projects and as the director of Mission and Communications. Sister Margaret Anne took final vows in 1973.

Installation of the Provincial Leadership team will be held July 9, 2017 in the Ancilla Domini Chapel, Donaldson.

As the Provincial Leadership Team begins its term of office, the Sisters minister with the knowledge of the congregation’s prayerful support. It is through dedication of the Sisters, Associates, members of the Fiat Spiritus Community, co-workers, and those serving in sponsored ministries that the charism of Blessed Mary Catherine Kasper, foundress of the Poor Handmaids of Jesus Christ, continues to have a rippling effect in our society and the world.