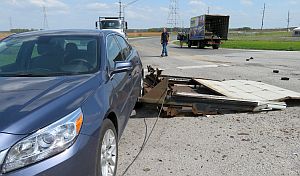 No injuries were reported in a three vehicle crash Wednesday afternoon at US 31 and 13th Road.

About 3:30 in the afternoon County Police and Plymouth Fire responded to the scene.

The crash report from Marshall County Police Officer Joe Giordano say 84 year old Sharon Smith of Logansport was southbound on 31 near the intersection when a Premier Rental box truck driven by 38 year old William Miller Jr. of Plymouth failed to yield and collided with Smith’s 2014 Chevy SUV.  The impact caused the rear door and lift gate of the box truck to fall on the road striking a 2015 Chevy Malibu driven by 54 year old Gary Duckett of Walkerton that was sitting on 13th Road waiting to head north on US 31.

No injuries were reported and traffic in the north bound lanes was limited to one lane for about an hour while the crash was cleaned up.