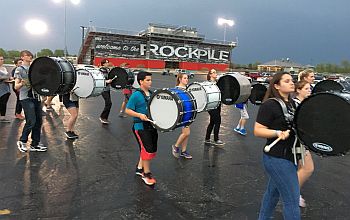 As most music programs across the state are starting to finish out their concert and competitive seasons, the high school bands in Marshall County are gearing up and practicing hard in preparation for a first-ever and historic performance opportunity this spring. The combined marching bands of Plymouth High School, Bremen High School, Culver High School, Triton High School and LaVille High School will be marching together as the combined “All Marshall County Marching Band” in this year’s Indianapolis 500 Spectacular Parade on Saturday, May 27th.

Plymouth High School band director Bryan Ames organized the event last year by contacting all of the Marshall County band directors to see if there was an interest in combining forces to created one massive band representing the entire county. “This is going to be such a great opportunity for our individual programs and all of the students involved. Many of our area school systems are small, but have very active band programs. This is an opportunity for all of our students to come together and have the chance to march together in a very large combined ensemble. We are estimating the total size of the marching band to be nearly 225 members.”

“Spirit of Triton” band director David Seel has been working with his students to prepare for this event. “We’re very excited to be a part of such an awesome experience to see so many kids working together as one to put this together. I hope we can continue to perform together as a county band for this parade and other opportunities,” said Seel.

Another area program has seen much growth and success in the past couple of years. Nick Lieto, director of bands for LaVille, has resurrected the marching band program at his school and has seen much success in rebuilding the program. Lieto said, “LaVille is very excited to be a part of the Marshall County Marching Band. This is only our second year as a competitive band, and we are doing great! We are extremely honored to work together with such fantastic educators and students.”

Matthew Sutton, director of bands for the Bremen “Emerald Alliance,” and Jason Crittendon, director of bands for Culver Community High School also have their students practicing and working hard for this event. “Each of the five participating schools are doing an excellent job preparing for the big day, and it is a great experience to be able to perform together before the beginning of our competitive season,” said Sutton.

One of the original events produced by the 500 Festival, the IPL 500 Festival Parade, has grown to be one of the signature events held in the United States each year. The parade is the only 500 Festival event that has taken place every year since being founded in 1957. The 2017 IPL 500 Festival Parade will be held on Saturday, May 27. 300,000 spectators are expected to line the streets of Indianapolis, joined by another one million watching from their televisions around the country, to view one of the nation’s premier parades. Tickets for the parade can be purchased online at www.500festival.com or by calling (317)-614-6400.