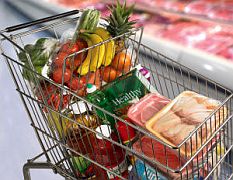 Grocery store prices have plummeted by more than 14 percent compared to a year ago, according to Indiana Farm Bureau’s spring market basket survey.

The national survey, which is compiled by the American Farm Bureau Federation, also shows a significant decrease of around 6 percent.

“As expected due to lower farm-gate prices, we have seen continued declines in retail prices for livestock products including eggs, beef, chicken, pork and cheese,” said John Newton, AFBF’s director of market intelligence. “As farm-gate prices for livestock products have declined and remained lower, prices in the retail meat case have become more competitive,” Newton said.

“Whether prices rise or fall, it’s important to remember that the farmer’s share of our food dollar remains really low and that it’s changed very little over the past few years,” noted Isabella Chism, INFB 2nd vice president and chair of the INFB Women’s Leadership Committee, which coordinates the survey. “On average, about 16 cents out of every food dollar goes to the farmer, according to the U.S. Department of Agriculture. The remaining 84 percent goes to the other parts of the food industry – those that get that food from the farm to our grocery stores and restaurants.”

Fourteen of the 16 items in the survey decreased in price compared to last spring. The items that decreased the most were cereal and eggs – which dropped by more than $1 – orange juice and boneless chicken breasts.

The survey’s prices compared to a year ago are:

The year-to-year direction of the market basket survey tracks closely with the federal government’s Consumer Price Index report (www.bls.gov/news.release/cpi.nr0.htm) for food at home.

“The results of this market basket survey track with overall food price trends that we’ve seen from the BLS,” Newton said. ”The Bureau of Labor Statistics shows that food prices are down from prior year levels. This survey shows that we continue to have a safe, affordable and high-quality food supply here in the United States.”

The INFB survey is part of a nationwide survey compiled by the American Farm Bureau Federation from data supplied by state Farm Bureaus. AFBF, the nation’s largest general farm organization, has been conducting the informal quarterly market basket survey of retail food price trends since 1989. The series includes a spring survey, summer cookout survey, fall survey and Thanksgiving survey. A total of 117 shoppers (11 of them from Indiana) in 31 states participated in the latest survey, conducted in March.