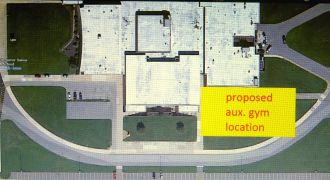 Triton Superintendent of Schools, Donna Burroughs will conduct a community meeting on the tentative plans to build an auxiliary gymnasium southeast of the current gym at the high school.

Initially estimated at $2 million the preliminary plans and detailed estimates from a Fort Wayne architecture firm are from just over $4 million up to $4.2 million.

There are two design concepts with one addition being 115 feet wide and 200 feet long.  It would house 1 competition court and two practice courts with bleacher seating for 500.  Locker rooms would be included and an upper level wrestling room.

The second design is for a building addition 110 feet wide and 225 feet long. The extra width would allow for space between the competition and practice courts. The other difference is the wrestling room and locker rooms would be on the first floor.

Triton Superintendent Donna Burroughs said the public meeting on April 25th will discuss the reasoning for the increase in the estimated cost. She said they plan to fund the construction with a bond issue and would also include a new roof at the high school and heating and air conditioning at the elementary for a project of $7.3 to $7.5 million.  This is estimated the tax impact for a homeowner with a house assessed at $100,000 would be less than $100 a month.  Construction on the auxiliary gym would begin second semester of 2018.