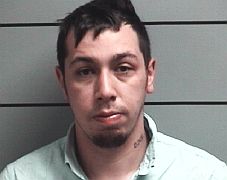 A 26 year old Culver man was arrested Monday night after county police were called in reference to an intoxicated person who was fighting with family members.

Just before midnight, Officer Ryan Hollopeter responded to the 16400 block of Redwood Road in Culver.  During his investigation it was determined that Dominic E. Sheets was guilty of Disorderly Conduct, a B misdemeanor and taken into custody.