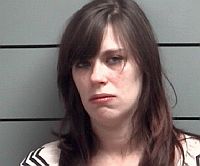 Early Saturday morning, April 15th, Emergency responders were dispatched to a single vehicle crash at the intersection of Thorn and 15th Roads.

The call came into the 911 Dispatch Center at 2:10 in the morning of a vehicle into a utility pole.  The caller said the female driver exited the vehicle and was walking westbound from the accident.

Marshall County Police Officer Wozniak located the female within minutes and found that she was not injured.  Identified as 27 year old Monica Hipsher of Leiters Ford, the officer found her to be under the influence of alcohol.   She was taken to Plymouth Hospital for a certified blood draw and showed to be over double the legal limit.

Hipsher was taken to the Marshall County Jail and booked in for Operating A Vehicle with a BAC of .15% or more.  She was held on a $1,500 cash bond that was paid at 1:30 in the afternoon and released with a May 2nd court date in Marshall Superior Court II.