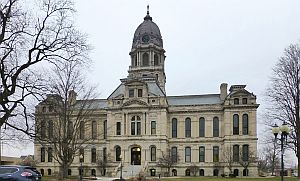 On Monday, a twelve person jury plus three alternates were seated on the first day of the trial of Kosciusko County Sheriff Aaron Rovenstine. Rovenstine is charged with three counts of bribery, intimidation, assisting a criminal, and five counts of official misconduct.

There had been concerns about the availability of finding enough individuals for jury duty due to school spring breaks in Elkhart, Kosciusko, and Marshall Counties. Approximately 75 potential jurors were summoned to court with some 52 of those being questioned by Marshall County Deputy Prosecutors Tami Napier and Matt Sarber who are serving as special prosecutors in the Kosciusko County case and defense attorneys James Voyles and Jennifer Lukemeyer of Indianapolis. Attorney Michael Miner, Warsaw, is also serving for the defense.

Originally Marshall County Prosecutor Nelson Chipman was selected as a special prosecutor; however, Chipman bowed out due to illness. The trial had been delayed in early February.   Elkhart Superior Court Judge Stephen Bowers took over the case after Judge Evan Roberts relinquished his appointment citing illness.