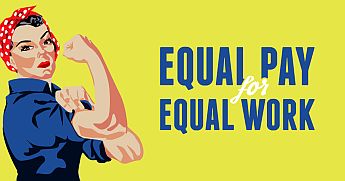 An analysis released for Equal Pay Day today reveals the size of the gender wage gap and its detrimental effects on the spending power of Indiana women. Women employed full time, year-round in Indiana are paid just 76 cents for every dollar paid to men, amounting to a yearly gap of $11,339. That means Indiana women lose a combined total of nearly $16 billion every year – money that could strengthen the state economy and is especially significant for the more than 301,000 Indiana households headed by women, 32 percent of which are in poverty.

The new analysis was conducted by the National Partnership for Women & Families using data from the U.S. Census Bureau. The full set of findings for Indiana, which has the 12th largest cents-on-the-dollar gap in the nation, is available here. The National Partnership also analyzed the wage gap for Black women in the state, as well as in Indiana’s congressional districts. All of these findings and similar findings for all 50 states and the District of Columbia can be found at NationalPartnership.org/Gap.

“Equal Pay Day is a painful reminder that women in this country have had to work more than three months into this year just to catch up with what men were paid last year,” said Debra L. Ness, president of the National Partnership. “This analysis shows just how damaging that lost income can be for women and their families, as well as the economy and the businesses that depend on women’s purchasing power. Entire communities, states and our country suffer because lawmakers have not done nearly enough to end wage discrimination or to advance the fair and family friendly workplace policies that would help erase the wage gap.”

According to the analysis, if the gap between women’s and men’s wages in Indiana were eliminated, a woman in the state who holds a full-time, year-round job would have enough money for 1.6 more years of food, more than 10 additional months of mortgage and utilities payments, 15 more months of rent, more than 20 additional months of child care, 1.2 additional years of tuition and fees at a four-year public university, or the full cost of tuition and fees for a two-year community college.

Indiana is not the only state with a wage gap. In fact, every state and 94 percent of the country’s congressional districts have one. The National Partnership finds that the largest cents-on-the-dollar differences in the country are in Wyoming, Louisiana, West Virginia, Utah and North Dakota. The smallest cents-on-the-dollar differences are in New York, Delaware and Florida. A ranking of all 50 states and the District of Columbia can be found here.

“Numerous studies show that the wage gap persists regardless of occupation, industry, education level or perceived personal choices,” Ness continued. “That is why we need a set of public policies that ensure women have access to good and decent-paying jobs, the support they need to stay and advance in their careers, and fair and nondiscriminatory treatment wherever they work and whatever jobs they hold. That means fair pay and practices, family friendly workplace standards, full funding for federal agencies that investigate and enforce fair pay, and comprehensive reproductive health care.”

Tomorrow, members of Congress are expected to reintroduce the Paycheck Fairness Act, which would help break harmful patterns of pay discrimination and establish stronger workplace protections for women. National Partnership experts say the bill would help close the wage gap, along with policies like the Healthy Families Act, which would guarantee paid sick days; the Family And Medical Insurance Leave (FAMILY) Act, which would create a comprehensive paid family and medical leave program; and measures that would increase the minimum wage and strengthen pregnant worker protections.

The National Partnership’s analysis of the wage gap was released in advance of Equal Pay Day, which is April 4 this year. Equal Pay Day marks how far into the new year women must work in order to catch up with what men were paid in the year before. The findings for all states are available in map form at NationalPartnership.org/Gap, in addition to analyses of the wage gap at the national level, in the 20 states with the largest numbers of Black women and Latinas who work full time, in more than 20 major metropolitan areas, and in all 435 congressional districts.

The National Partnership for Women & Families is a nonprofit, nonpartisan advocacy group dedicated to promoting fairness in the workplace, access to quality health care and policies that help women and men meet the dual demands of work and family. More information is available atNationalPartnership.org.