Park Board Tables Requests for Banners at Baseball Fields 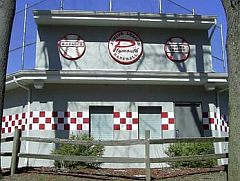 Ryan Carroll from Plymouth Junior League Baseball and Plymouth High School Varsity Baseball Coach Ryan Wolfe appeared before the Plymouth Park Board Monday evening with a request to place advertising banners on the fences as a fundraiser.

Carroll told park board members, after having parents complete a survey last year it was determined they wanted to update equipment and have more umpires available for games.  He said, “That all takes money and we wanted to find a new fundraiser so we wouldn’t have to increase the cost to participate in the leagues.”

Junior League would use banners on the side of the batting cages at the C-league and B-league diamonds and on the top left of the Pony League diamond always being careful not to block viewing from the outfields.

Coach Wolfe said he’s used smaller banners for a few years on the fences just inside the gates but wanted to do a bigger fundraiser offering larger banners on the outfield fence at Nixon Field.

Several park board members had some concerns on the esthetics, fearing the banners would be brightly colored and may not weather well.  There was also concerns that citizens would get the perception the park sold out the baseball fields.

While the banners at Nixon Field would be on the inside of the wind screen and not visible from the outside the ones at C-league, B-league and the Pony league diamonds would be more visible to anyone using Centennial Park.

Park board members tabled both requests to allow time to consider the request and get feedback from the public.  They board did approve a 4 by 8 sign on the back side of the visitor’s bleachers at Nixon Field.  The signage will have the 2017 PHS Baseball Schedule on it and promote major donors and be visible from the street.