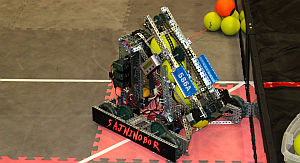 Last year, 24 teams competed in the tournament. This year, Schieber said 46 teams have signed up!

Mr. Schieber said, “There will be high school and middle school teams competing in the tournament, including multiple teams from Indianapolis, Plymouth, Mishawaka, Portland, Crown Point, Portage, and other surrounding areas.”

Jason Doody, a 2015 PHS graduate, is back for his second year as a coach for the robotics teams for Plymouth High. He said, “Vex Starstruck is fast and competitive, the tide of the game can switch in seconds which makes Starstruck fun and a great time for the whole family.”

The VEX Robotics Competition website says Starstruck is played on a 12 ft x 12 ft foam-mat, surrounded by a sheet metal and lexan perimeter. There are 32 stars and cubes, which teams can score into zones; teams also score points for hanging above various heights. Two alliances – one “red” and one “blue” – composed of two teams each, compete in matches consisting of a fifteen second autonomous period followed by one minute and forty-five seconds of driver-controlled play.  The object of the game is to attain a higher score than the opposing alliance by scoring your stars and cubes on the opposite side of the field.   Additional points can be earned by elevating robots in your climbing zone.
Admission to the PHS Robotics Tournament which will be held in the in the varsity gym is free. Doors open at 7:00 a.m. for set up. Registration and check-in inspections will occur from 8:00 a.m. to 9:15 a.m. Moore said the first qualifying matches will begin between 9:30 a.m. – 9:45 a.m. The championship rounds will start close to 3:00 p.m., lastly the awards ceremony is slated to occur between 4:30 p.m. and 5:00 p.m. Concessions will be available.

The team which receives the Excellence Award automatically qualifies for the State/Regional Championship.

The team which is crowned the Robot Skills Winner automatically qualifies for the U. S. CREATE Open Robotics Championship.

The Tournament Champions qualify both for the State/Regional Championship and the U. S. CREATE Open Robotics Championship.
For more information about this event visit: www.robotevents.com/robot-competitions/vex-robotics-competition/RE-VRC-17-5320.html