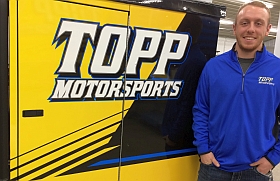 Rochester, IN – TOPP Motorsports has announced a new addition to team for the 2017 season, Dylan Woodling. Woodling, a Warsaw, Indiana, native, has over twelve years of racing experience under his belt.

“Dylan is a phenomenal addition to our team,” said Kevin Birchmeier, owner of TOPP Motorsports. “He has so much experience and we’re really excited to take the dive into Modifieds with Dylan.”

Woodling will be driving a U.M.P. Modified Race Car for the team, racing about twenty national races in the Midwest region. He will sport the TOPP Performance Race Parts logo as one of the main sponsors of the vehicle.

“I’m so thankful for the opportunity to drive for TOPP Motorsports,” said Woodling. “I’m looking forward to racing and hopefully getting some wins for the team.”

Woodling has raced in the WKA Karts, ALMS Late Models, UMP Modifieds, 600 Sprints, and UMP Pro Sprints. He has had a top 500 ranking (392) in the NASCAR Whelen All-American Series, has been in the top 30 for the past two years in UMP national points. Wooding’s resume also includes accolades such as the 2015/2016 and 2016/2017 Midwest Indoor Racing Series Cage Kart Champion, 2015/2016 Midwest Indoor Racing Series Heavy Clone Kart points runner up, the 2015 Plymouth Speedway points runner-up, and over 30 career feature wins.

Woodling joins seasoned sprint car driver, Tyler Courtney, as the second driver for the team for 2017. TOPP previously announced that the team will be running the national USAC Series with Courtney for the 2017 season.

TOPP Motorsports, based out of Rochester, Indiana, was established in 2015. The organization is owned and operated by TOPP Industries President and CEO, Kevin Birchmeier, who has always had a passion for racing. After attending the World of Outlaws Nationals with TOPP as the title sponsor for Tyler Courtney’s 23c wing sprint car in October 2015, Birchmeier’s drive for the sport increased exponentially. Combining his business success with the desire to be involved with talented drivers and dirt track racing, Birchmeier launched the TOPP Motorsports Inc in late 2015.