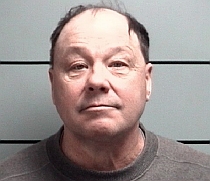 A Marshall County man could spend time behind bars for allegedly shooting two of his neighbor’s dogs. It happened in the 17000 block of Vine Street around 1:15 p.m. Tuesday.

Joseph Dyrcz of Tyner was arrested for Cruelty to Animals and Criminal Recklessness with a Firearm, both Level 6 felonies.

Marshall County Sheriff Matthew Hassel says while being taken into custody, Dyrcz admitted to police that he was responsible. His reason for allegedly shooting the dogs was because they were barking.

Two neighbors called 911. Officers responded and were pointed in the direction of Joseph Dyrcz’s house.

Marshall County Sheriff Matt Hassel said, “He did tell the officer he was responsible. He indicated to my investigators that the dogs were continually barking and this was an ongoing problem.”

“It’s upsetting because what you see so many times when things go foul in a neighborhood just because neighbors won’t talk and work together,” said Hassel.

Sheriff Hassel confirms that one of the dogs died during the shooting; however, the last he had heard, the second dog involved was still alive.

Wednesday evening, WNDU confirmed with the dog’s owner that one dog did indeed die, while the six-month-old puppy involved is still alive and is expected to be okay.

Dyrcz has not yet been formally charged, and he has bonded out of jail on a $1,500 cash bond.

According to the Marshall County Prosecutor’s Office, official charges are expected to come down by the end of the week.

If charged and convicted, each Level 6 felony can come with more than a year in prison.

Provided by our news partners at WNDU