Salinas Arrested for Driving on Suspended ID Card and No License 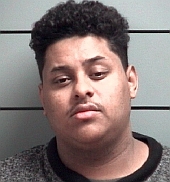 On Wednesday January 18, at approximately 9:40 p.m. an officer with the Marshall County Police Department stopped a vehicle on Michigan Street in Plymouth near US 30.

During the course of the traffic stop it was determined that the driver, 25 year old Joel Guerrero-Salinas of Plymouth was driving on a suspended ID number and had never received a license. He was transported and lodged into the Marshall County Jail and held on a $1,500 cash bond.