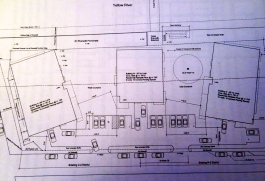 On Tuesday the Marshall County Drainage approved the variance request of the City of Plymouth for the River Gate South residential project.

The architect for the project that proposes to build three buildings on the south side of the Yellow River at Lake and Michigan Streets in downtown Plymouth told the County Drainage Board the corner of two of the buildings would be at the 20 foot instead of the required 75 feet.   He said that while the final design isn’t complete allow a reduced setback will allow flexibility in the final design.

The buildings will sit close to the existing sidewalk area that will become part of the Greenway Trail when the proposed walking bridge is installed.

Commissioner Kevin Overmyer said, “This is something that is desperately needed in Marshall County for millennials.  This is the type of housing professionals are looking for.”  He suggested creating an agreement between the City and the Drainage Board similar to the one in place for the Greenway Trail.

It was brought to the attention of the Drainage Board that with the Greenway Trail, landscaping, trees and seating along the south side of the river, work on the river could not be completed from that side.

The County Drainage Board voted 3 to 1 in favor of reducing the setback to 20 feet.  Dan Vories, the citizen members voted against the project.