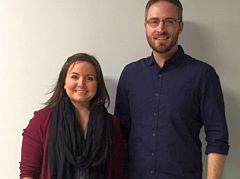 Tuesday evening current Bourbon Public Library Director, Heather Barron introduced Nick Treber to the Town Council as her replacement. Barron has accepted a position as the Director of the Plymouth Public Library.

Treber is a 1998 Triton High School graduate. He has been with the Allen County Public Library for the past eight years. Treber said, “I enjoyed going to the Bourbon Library growing up.” He has relocated back into the Bourbon community and is pursuing a degree in library science.

Bourbon Police Department Chief, Bill Martin, submitted his December 2016 Activity Report and the Year End Activity Report to the Bourbon Town Council Tuesday evening. Among other items, the year end report shows a total of 38, 863 miles traveled on patrols and other duties.

During the meeting, Martin suggested increasing the fines for repeat offenders who disregard town ordinances. After much discussion, the Council concurred with Martin’s recommendation and will have Town Attorney Mark Wagner prepare amendments to be presented at the February meeting.